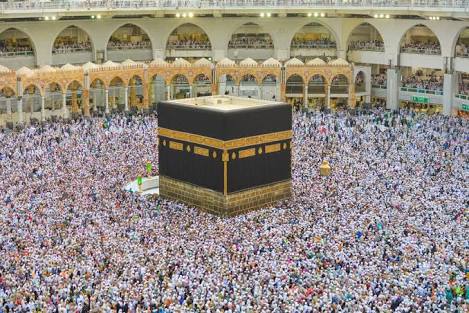 Historical Events That Prevented Muslims From Visiting The Holy City In The Last 1,400 Years.

As Hajj pilgrimage is under risk of cancellation for this year due to the coronavirus pandemic, people ask: is it the first lockdown in history?

Every year, nearly 2.5 million pilgrims visit the holy sites of Islam in Mecca and Medina for a week-long ritual, which is a once-in-a-lifetime duty for every able-bodied Muslim.

The kingdom stopped umrah, a non-mandatory pilgrimage, in late February due to the pandemic. With the rising Covid-19 cases around the world, the cancellation of the Hajj pilgrimage, which starts in late July, is also on cards.

Muslims around the world shudder seeing the pictures of empty Kaaba, a cube-shaped building towards which they pray, since it’s almost always full of pilgrims making rounds and reading verses of the Quran.

If the Hajj pilgrimage is truly cancelled this year, it won’t be the first, however.

Here are some historical events that prevented Muslims from visiting the holy city in the last 1,400 years.

The attack on Kaaba by Abraha

In 570 AD, Yemeni governor Abraha was building a cathedral in the city of Sanaa to make a new centre for pilgrimage.

He realised that the Kaaba already served that purpose, so he organised a major military expedition to destroy Mecca to direct pilgrims to his cathedral and make Yemen the only destination for pilgrimage.

In 570 AD, a year before the birth of Prophet Muhammed, he launched an invasion campaign to Hejaz. He reportedly aided his large army with one elephant. As they came close to the holy Kaaba, the elephant did not move further.

The residents of Mecca, who were incapable and unprepared to stand against Abraha’s army, fled to the mountains. That year, people could not make the pilgrimage to Mecca, fearing war. Several historians have reported that Abraha’s forces could not maintain the siege as they were struck by “divine” powers, which eventually crushed his army and ended the siege.

The number of people who came to Mecca for the pilgrimage began to decrease each year after the Shiite Qarmatians State started to carry out continuous attacks on Mecca and its pilgrimage routes before 930 AD.

Islamic scholars issued a fatwa in 930 banning the pilgrimage to Mecca pilgrimage because of the lack of life and property security.

In the same year, the leader of the Qarmatians, Abu Tahir al Jannabi, raided Mecca and massacred tens of thousands of pilgrims.

Before the Shia Qarmatians left Mecca, they stole the door of the Kaaba as well as Hajr Ul-Esved, also known as the black stone, which dates back to the time of Adam and Eve. The two stolen items remained under their control for 20 years.

Epidemic outbreaks
There were many outbreaks in the Hejaz region of the Arabian Peninsula over the 19th Century, such as the plague, cholera and meningitis.

The spread of the plague epidemic in the Hejaz region in 1814 caused the death of about 8,000 people, and the pilgrimage was not allowed that year. An epidemic started again in the pilgrimage season of 1837, continuing until 1892.

Nearly a thousand had died every day due to the highly fatal epidemic between this period. Doctors from Egypt were sent to build a quarantine on the road to Mecca to look after people.

On November 20, 1979, Juhayman al Otaybi raided the Kaaba in the morning prayer. He expressed several political demands including the dismissal of the Saudi regime, the end of the kingdom’s relations with Western superpowers, the halt of the sale of oil to Western countries, and the closure of foreign military bases.

The High Scholar Committee of the kingdom issued a fatwa, asking the Saudi regime to launch an armed intervention and rid the city of all the rebels.

The raid continued for about 15 days and was only ended with the help of a specialist team from France. During the raid, Kaaba remained closed for two weeks.

I Never Knew That our Entire Healthcare Infrastructure Is In Such A Bad State- Boss Mustapha, SGF