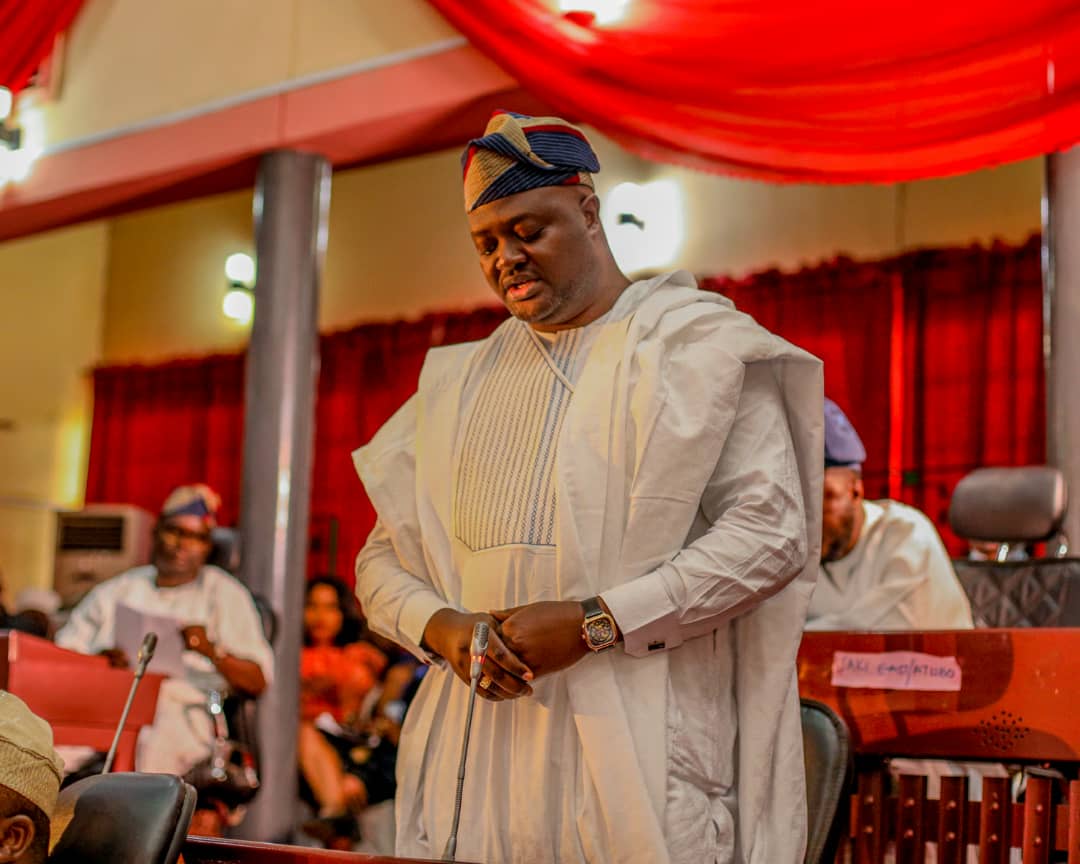 The Peoples Democratic Party, PDP Whip of the Oyo State House of Assembly, Honourable Akintunde Olajide, has described the Oyo state Governor, Seyi Makinde, as an exceptional leader other Politicians Must learn the art of managing both human and material resources from.

The lawmaker, who made this known in a congratulatory message to the Governor on the occasion of his second 2nd year in office celebration which he personally signed and made available to sunrisebulletin on Saturday 29th of May said that Seyi Makinde has achieved so much beyond anyone’s expectations within just two years as governor.

Makinde’s administration officially hits two years in office on May 29, 2021 after he was sworn-in as the Executive Governor of Oyo state on May 29, 2019 after defeating candidate of the All Progressives Congress (APC), Chief Adebayo Adelabu, ‘Penkelemes’ at the 2019 governorship poll.

According to the congratulatory message, AKT as he is fondly called said that people oblivious of the workings of government ordinarily expect the house of Assembly to play antagonistic role to the executive arm in order to prove a point.

He noted that the ultimate goal of being in public office is to improve on the quality of life of the people stressing that when a government has shown the Political will and commitment to achieve that same goal, there was no need to stand in the way of such government regardless of which political party holds power.

He explained that Makinde’s success story within only two years into his first term in office has brought Politicians who are genuinely in the opposition parties as constructive watchdogs to be at peace with the governor which has justified a passage in the Holy Bible that says “when the ways of a man pleases God, He causes even the man’s enemies to be at peace with him.”

The lawmaker who doubles as the Chairman, House Committee on Commerce and Cooperatives, maintained that only Politicians who will stop at nothing to deploy the instrumentality of politicking to bring down a man who is obviously a God sent man would stand in the way of what Hon Akintunde described as an “exceptionally performing governor.”

He urged residents in the state to shun partisan politics and continue to support Governor Seyi Makinde who he said has proved his political will to deliver beyond all reasonable doubts.

“Governor Makinde has made politics and governance so appealing and interesting such that the political consciousness and participation in the state has increased drastically.

“I for one did not expect considering the prevailing circumstance we have found ourselves in Nigeria that any governor could even achieve half of what Governor Makinde has achieve in just two years.

“Presently, we are faced with multiple prong challenges that threaten the very core of our collective destiny as a people in a country but in Oyo state, Seyi Makinde has made the situation look as if we are in a different country with his people-centered and people-oriented policies.

“Talk of Education sector, infrastructural development that has transformed the state into a construction site, Health sector that now works for even the very common man on the street, workers and pensioners welfare, sound economic policies, programs, and initiative that have made Oyo investment destinations of local and international investors etc.

“It is on record that no Government in the history of Oyo state has paid workers salaries on or before 25th of every month consistently without delay for two whole years despite the financial and economic condition of the country which has even forced the federal government to urge state government to jerk up internally generated revenues in order to meet their obligations.

“We feel so proud that it is in our own time and era before our very eyes that we have such a fine and refined gentleman at the helms of affairs of the state and as lawmakers, we can only renew our resolve to ensure this government does not derail.

“I want to on behalf of the very good people of Lagelu local government, thank God for Governor Makinde and his cabinet for all the success story in just two years and we can only hope for more of such good governance. We will continue to provide all the needed support to make sure Oyo state attain its enviable and rightful place as the pacesetter state.” Hon Akintunde said.

Meanwhile, commendations and eulogies across political divides, associations, professional unions and others have continued to trail Seyi Makinde’s second year celebration as the Governor of Oyo state.

Many have described Makinde’s performance within his first two years as sterling and have rallied support for the governor in order to continue to deliver on his election promises to the people of Oyo state.