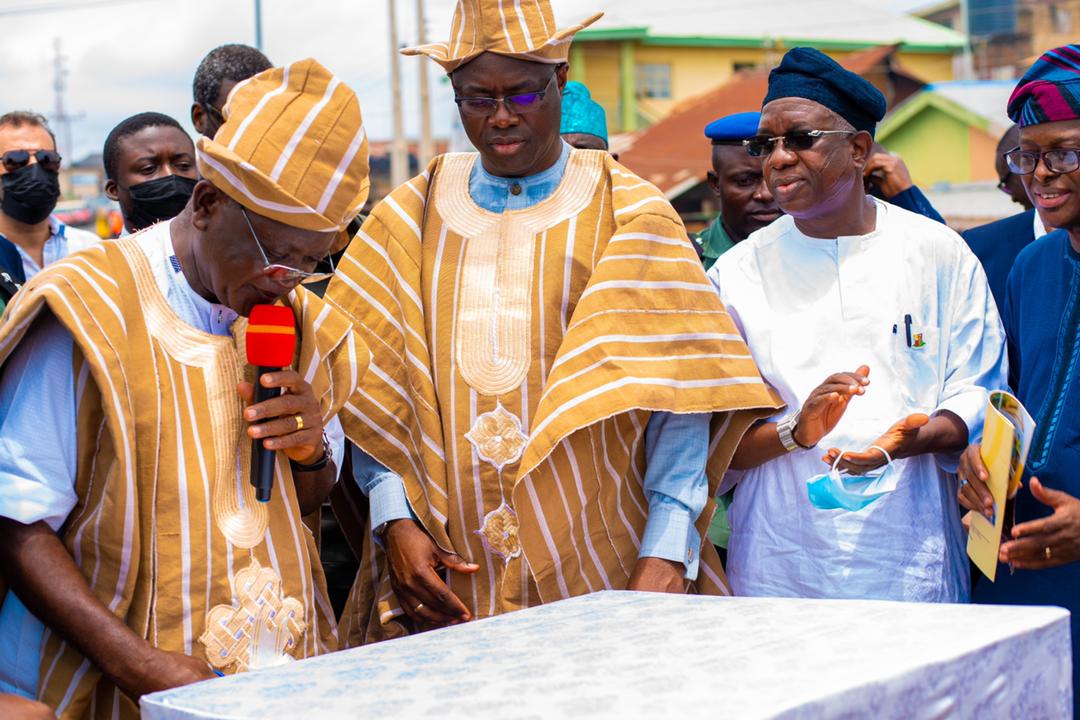 As part of activities lined up in continuation of commemorating Governor Seyi Makinde’s second year anniversary since assumption of office on May 29, 2019, the governor has commissioned yet another 65km Moniya-Ijaiye-Iseyin Road.

Makinde accompanied by his Benue state counterpart, Samuel Ortom at the Commissioning of the road on Thursday June 3, explained that his administration remains committed to Commissioning all projects embarked upon before expiration of the present administration by 2023.

Makinde said: “We are here today to commission one of the projects which will play a major role in our engineering a modern Oyo State – an Oyo State where the prosperity of the people through economic integration serves as the fulcrum of our decisions.

“But first, let me once more, appreciate my brother Governor, Samuel Ortom of Benue State for travelling down to be with us on this happy occasion. I want to use this opportunity to convey the deepest sympathies of myself, my family and good people of Oyo State to you over the death of your Senior Special Assistant on Security, Christopher Dega. May God grant you and his friends and family the strength to bear the loss.

“I am sure I speak for myself, the people of Iseyin in particular and the good people of Oyo State when I say, we are delighted that you could be here today at the commissioning of the 65km Moniya-Ijaiye-Iseyin Road.

“This road remained in a deplorable state for several years. I remember that immediately after I became governor, I began to receive SOS messages regarding this road. I remember this particular request on social media from someone who said some parents have had to withdraw their children from school because of their inability to navigate this road to get to school.

“The state of this road also kept people away from going from Moniya to Iseyin. On a good day, they would spend three hours out here. You can then imagine what it would be like on a bad day when perhaps a truck has broken down at one of the terrible spots.

“Although a contract for rehabilitation of this road was awarded by the previous administration, our initial inspection visits in 2019 revealed that the contractors had not even done 5% of the work here before abandoning it. We therefore had to revoke and re-award the contract.

“I always say that whatever decisions we make at any point in this administration will be based on science, data and logic. So, we factored in that we wanted this road to be top grade and last at least 10 years before any rehabilitations. For this reason, we decided to increase the stubbing course from about 150mm to about 200mm, and we also changed the asphaltic wearing course from 40mm to 50mm.
Looking at the initial design, we also realised that there was inadequate provision for drainage. So, we had to remedy that too.

“More importantly, the original contract was for what they called, “limited rehabilitation.” This is just a fancy way of saying they would patch the road.

“They would look at those areas that they felt were bad and do some rehabilitation works. For us, this was flawed logic. We knew this would only amount to kicking the ball forward. In a year or so, we would be back to doing major rehabilitations.

“So, with all the available data, we decided that the more logical thing to do would be to increase the contract sum by about 2.9 billion Naira and deliver the quality of road that our people deserved.

“What we have done here is the total reconstruction of this 65km road at 9.9 billion Naira and this translates to 152 billion Naira per kiliometre.
So again, based on science, data and logic we made the best decision overall.

“Of course, we understood the economic significance of this road not only to individual residents but also to the growth of commerce and industry.
The Moniya-Ijaiye-Iseyin Road is the link between Ibadan and Oke-Ogun, Oyo State’s food basket.

“This road also hosts the once moribund Pacesetter Quarry and Asphalt Plant; not only have we resuscitated the plant, but it is already producing asphalt that we use in the building of our roads here in Oyo State. As we drive down this road, I am sure you will see the economic impact it has with the springing up of farm estates on both sides of the road.

“So, as we commission this road, let me again remind our people that we promised you economic development and prosperity through our Roadmap to Accelerated Development in Oyo State, 2019-2023. This is just another way that we are delivering on good governance. This is another promise kept.”