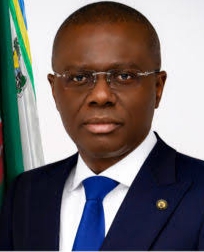 As 2023 approaches and serious politicking among politicians begins to gather intensity, the fear of uncertainty may have gripped Lagos State Governor, Babajide Sanwo-Olu, as has made it clear that Lagosians will miss his government if he is not allowed a second term as the governor of the state, in the next gubernatorial elections.

He made the statement on Sunrise Daily, a programme of Channels Television, on Thursday, while featuring as a guest.

He also said his Government was making frantic efforts to meet the yearnings and expectations of the people of Lagos state.

According to him, his administration will finish strong at the end of his first term.

He said, “I think we are doing a very good job, I dare say so. I think the citizens know what it is they will be missing if they don’t let us continue to wrap up all the things we are doing.”

When asked about a possible second term bid, The Governor responded that he is consulting stakeholders on the future of the state.

“I will ask; I will consult. Citizens, how do you see it? These are some of the things; that’s how you get it down. Try and finish very strong. You will know when it is time for us to do all the politicking”

According to a statement on his verified Facebook page, the governor informed Lagos residents concerning the red and blue lines rail projects, the integrated transport strategies, and the ongoing road developments in Badagry and Ikorodu, embarked upon by his government.

“I also addressed the 4th Mainland Bridge which is a big project we want to deliver under Public-Private Partnerships.

“I want to say our administration is doing well, even if I do say so myself and our people can also testify to the progress we are making across board,” Sanwoolu added.