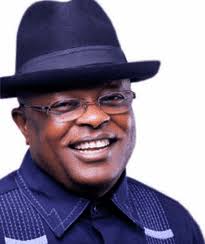 David Umahi, Ebonyi state governor, David Umahi, has reportedly told the national leadership of Peoples Democratic Party (PDP) that he is ready to call pitch his tent elsewhere in pursuit of the realization of 2023 presidency.

According to The Punch, the governor made his defection known on Tuesday, November 10, confirming the speculations that Umahi is calling it quit with the PDP national working committee members.

At his home in Abuja, Umahi was said to have made up his mind on his next political move by maintaining that his decision to leave the party is irrevocable and can never be stopped.

Sunrisebulletin.com gathered that Umahi told the national leadership of PDP that he will be pitching his tents with the ruling All Progressives Congress (APC), citing southeast 2023 presidency project as the reason for his actions.

According to an inside source, the governor was said to be convinced that the ruling party may zone its 2023 presidential ticket to the southeast.

Although members of the PDP NWC including the deputy national secretary Agbo Emmanuel, women leader Mariya Waziri, and national organising secretary Austin Akobondu tried to persuade the governor to stay, Umahi maintained that there is no going back on the decision.