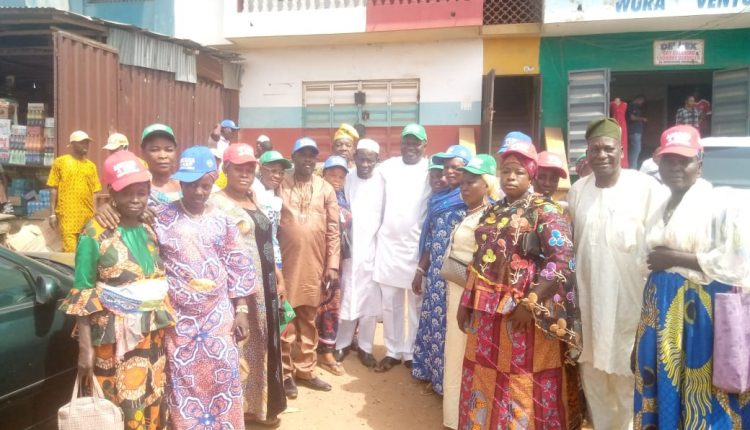 Leaders and party stalwarts in Lagelu Local Government chapter of the People’s Democratic Party (PDP) have joined forces together in their bid to further advance their “Lagelu lo kan” (It’s Lagelu’s turn) political project on Monday took the lead to Akinyele local government as Abideen Adetokunbo Adeaga Officially declared his intention to contest for the 2023 House of Representatives on the platform of the ruling party in Oyo state.

Adeaga, who is a successful UK based entrepreneur before returning home to Nigeria held several executive offices under the PDP Diaspora being a founding member of the party in Britain since the return of democracy in Nigeria in1999 while living in the United Kingdom (UK).

Speaking with newsmen shortly after his formal declaration at the PDP Local Government Party Secretariat, Akinyele, Ibadan on Monday December 20, Adeaga, who commended Governor Makinde for making the ruling party the toast of many politicians and prospective political aspirants said he is all out to serve his people with quality and sound representation at the green chamber of the National Assembly.

The House of Reps hopeful who was also accompanied by no fewer than eleven elected Councilors out of the fourteen in Lagelu Local Government went memory lane on how the political journey began upon arriving the UK some over 25 years ago with high hopes and expectations as a young Nigerian abroad. He noted that the passion driving his active involvement in politics was all about giving back to the people and bringing practical developments to Lagelu/Akinyele federal constituency.

“We are here today to formally declare my intention to contest the 2023 House of Reps to represent Lagelu/Akinyele federal constituency so that the era of docile or poor representation at the green chamber of the National Assembly can be brought to an end because my people certainly deserve so much more as a people with great history in this state.

“If you take a look at how joyful people are by yourself, you would know for sure that this is God’s mandate because you can see how happy and excited they are simply because I declared my intention to contest. Truly the voice of the people is the voice of God and we believe that with God on our side, this mission is an already accomplished one.

“Even though a lot of people have been expecting this for a long time I believe in God’s time and I believe that God’s time is now which is why God placed it on my heart to come out publicly and make this declaration to contest to represent my people at the National Assembly because they deserve nothing less than quality and sound representation.” Adeaga said. 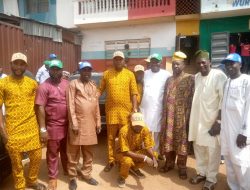 Speaking on the leadership of the party in Oyo state and his trust in a free, fair, and transparent political process that will produce the party’s flagbearer come 2023, Adeaga praised Governor Makinde for his political style and approach to leadership stressing that the party remains supreme to any individual political ambition saying he will not at any point allow personal interest conflict with the party’s overall interest.

“The man at the helms of both Government and party’s affairs in Oyo state today, our able Governor Oluwaseyi Abiodun Makinde is a man of the people. I know him to be a very trustworthy person, he will always stand by the truth and defend it to the end. He will never allow anyone to suffer injustice of any form so I feel safe and secured as a party man under his able leadership.

“He has been a victim of imposition himself and I know that he will not allow imposition of candidates in our party. I am a party man and I have been a party man under the PDP for a very long time even as the former PDP Public Relation Officer (PRO) southwest UK and also PDP Vice Chairman, UK and Iceland from way back before I finally decided to return home. So, It is PDP first, all others come second.” Adeaga added.

Speaking earlier, some of the PDP leaders from Lagelu who spoke while introducing Adeaga commended the political aspirant for being a committed party man to the core even while he was away in the UK. They noted that he has performed exceptionally well as a loyal and committed PDP member living in diaspora by always reaching out to the party in Lagelu all the time he was being called upon for supports and assistance.

They solicited for support from the leaders and elders of PDP in Akinyele to throw their weight behind Adeaga for the realization of his political aspiration stressing that a man who has done so much for the party in his private and personal capacity without any political ambition for many years deserves a reward for such noting that such political support will encourage others to emulate the act of showing commitment to the party even when no political ambition was attached.

The Chairman, PDP Akinyele Local Government, Engineer Akinsola Peter commended Adeaga, all the party leaders and other political bigwigs that accompanied the aspirant. He urged Adeaga to ensure he does the needful towards Akinyele as being done in Lagelu adding that the door of Akinyele is widely open for the aspirant’s political activities to all nooks and crannies of the local government.

In their separate remarks, PDP leaders in Akinyele commended Adeaga for taking the bull by the horns and bring the first person to officially declare his intention to contest for House of Reps on the platform of the party in Lagelu/Akinyele federal Constituency adding that the door of Akinyele is widely open for him to move around in pursuit of his political ambition.

Some of the leaders noted that for an aspirant to have been led by the array of political leaders, party stalwarts and no fewer than eleven elected Councilors out of the fourteen in Lagelu was a clear show of love and acceptance and assured that Akinyele is ready to work with Lagelu in unison to ensure whoever emerges as the party’s flagbearer eventually emerges winner after the general election.

Other Akinyele leaders who spoke noted that it is in order for individuals to formally indicate their intentions to contest the 2023 election but caution against a rancorous reactions that may lead to needless controversies. The leaders maintained that Governor Seyi Makinde remains the overall leader of the party in the state and his position on party related issues must be factored into any form of consideration urging prospective aspirants to intensify prayers on their aspirations.

The party leaders from Akinyele however, urged Adeaga not to limit his largesse to Lagelu alone noting that the aspirant should ensure even distribution of opportunities and other benefits due to Akinyele as being provided for the people of Lagelu should be given to them in Akinyele while assuring that even though, there may be others with same political aspirations with Adeaga who are yet to declare their intentions officially, politics should be played with the spirit of sportsmanship.