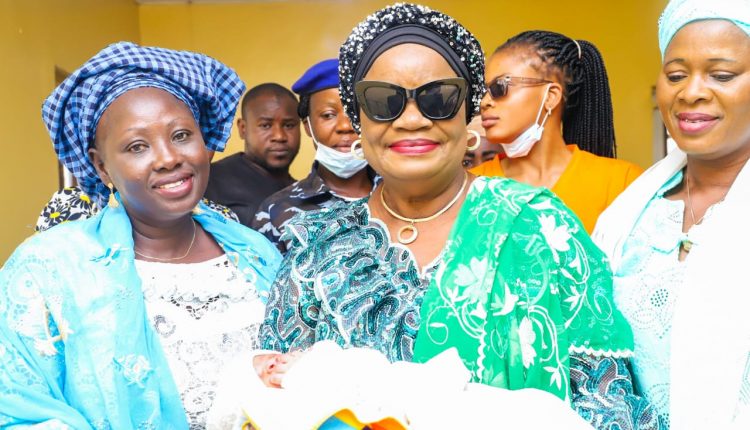 The wife of Oyo Deputy Governor, Chief (Mrs) Ajibola Lawal, on Sunday joined the mothers of two babies who ushered in the new year with a new addition of a baby boy and girl to their family in Irepo Local Government.

The two babies, who arrived at 12:01am at a different Hospital, Kishi, were delivered through normal delivery without complications.

Lawal who was in town with her husband to celebrate New Year with the constituents of Irepo Local Government, presented cash and other gift items to the mother of the two babies.

While welcoming the first two babies of the year in the Local Government, she advised the mothers on how to raise healthy children by exclusively breastfeeding them and making sure they get all the necessary immunizations at the right time.

She prayed that they wouldn’t contract the infections that happen to mothers after delivery and begged their husbands to take good care of them as well.

“I am extremely thrilled,” she exclaimed, “and I can also tell that the mothers were happy to meet us and the gift we donated on behalf of Irepo Local Government. I pray that God will protect the baby.

“So, I’m taking this opportunity to ask you to cast a large number of votes for Governor Seyi Makinde’s reelection because he has been demonstrating concern for the welfare of the wonderful people of Oyo state.

“I also want to implore everyone to get their PVC in order to elect other PDP candidates in the forthcoming 2023 e general elections.