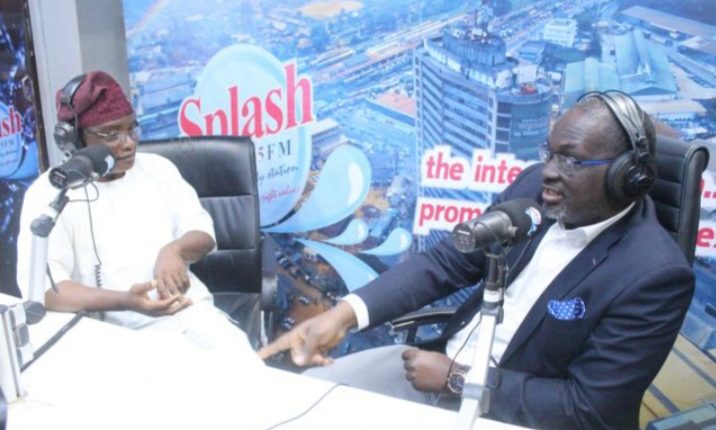 The Former Attorney General and Commissioner for Justice in Oyo State, Mr. Oluseun Abimbola, (SAN) was Olayinka Agboola’s guest on Splash 105.5FM’s Radio Show, Parrot Xtra/Ayekooto on Radio recently. During the interaction, he alluded to why local governments in Nigeria may never be truly independent.

You once served as the Oyo State Attorney General and Commissioner for Justice during the late Governor Abiola Ajimobi’s administration, are you still into politics today?

There is no one without a political spirit in them, one thing leads to the other, both the one that occupies a position and the other that does not occupy any political position. The issue of politics in Nigeria is such that it continues to metamorphose. When I left office as the Attorney General, I returned to legal practice. Presently, I am not an active politician in the field though I have my sympathy for the All Progressives Congress (APC) government.
Are you still interested in contesting for any elective post?

I can also contest to become a Governor, even though it is not everyone who aspires for political office that will eventually get it. God knows each of our aspirations.

There are controversies surrounding the emergence of the gubernatorial candidate of the APC, how will you advise the party to sort out the issue of his em, ‘legitimacy’?

I do not know what you mean by ‘legitimacy’.
Recently, your senior colleague, Chief Adeniyi Akintola went on air and attacked the leadership of the party in the state on the issue. What is your reaction to this?
Like I said earlier, there are active players on the political field and there are people who may have an understanding of what might have transpired between them.
I cannot speak to that because I do not know what transpired between them and I was not privileged to be part of their discussions. On the other hand, all political parties have their challenges. It is the same way in APC, PDP, and in other parties too.

I think the problem is that our political culture is still underdeveloped. Many times, because of our aspirations, we do not want any person to have a lead way or leverage.

I understand that if I do not become what I aspire to be today, tomorrow is always there for me but the political culture in this part of the world is that we want it now, now, without waiting for the appointed time. It is important to recognize that you are not the only one interested in it; the most important thing is building a nation.

During your tenure as the Attorney General in Oyo State, you were responsible for all legal advice to the state government and its agencies; do you remember your most challenging tasks at that time?
Yes, there were several of such because the state is made of hands and legs. When the hands and legs are working in an uncoordinated manner, doing different things without first seeking the opinion of what the law says, then, you have issues.
I was thinking you were going to talk about that time you crowned several kings in Ibadan…

That was the least of the issues because that process followed the process of law. Absolutely, the Court of Appeal validated it and that shows it followed the law. Like I said, we found a political solution to it but one more important thing is that there were many issues that we handled that did not appear on the pages of newspapers.

There was a claim against the government in terms of liability that the previous administration approved the sum of 50 million dollars. We managed to resolve it in a way that God helped us and we eventually won the case..

Furthermore, there are also many other cases, programs, projects that were computerized, one different part of it was that the law was modified particularly for the judiciary at that time.

We set up the multi door-court, the Customary Court of Appeal, Family Court, and the Grade A Customary Court, many of these institutions were built, and legitimized at that time, and they are still running.

What will you say was your major achievement during your tenure?
All those institutions came in while I was serving as the Attorney General and I had the support of Governor Abiola Ajimobi. One of them was the establishment of a judicial process to facilitate access to justice for the common person; any aggrieved person can walk into the Oyo State multi-door court and file a matter that will be resolved amicably without going through litigation. I enhanced the capacity of the center at the Ministry of Justice, even though I met it there. We amended the law to make it enforceable that if someone defaults, justice would be served.

What were the major challenges you encountered during that period?
We never had enough money to do as much as we wanted to do.
Recently in Nigeria, a family secured the validation of a 50-year-old document to recover over 200 plots of land in a well-built area in this state. The family claimed they had a superior title over the Certificate of Occupancy (C of O). Is there any superior title to it?

The major problem we have is the lack of support structure to implement some of these laws. On the face of the law, the owner of the C of O is the rightful owner of the property, however in the case of litigation; the judgment of the court overrides the certificate of occupancy.
Furthermore, the court has the right to strike out a case if there is a good reason and not an arbitral reason. When someone comes with a 50-year-old judgment, there is a provision in the law that allows you to validate and enforce the judgment. The law allows for revalidation but this might come alongside certain requirements and procedures.

There is a new trend in Oyo state, in which a family might come up with a narrative claiming that their forefathers are the rightful owner of some particular piece of land. They may further attempt to take legal steps to acquire the land. Many people do this because of idleness and greed. Their ancestors have already sold most of these lands a long time ago.
What are the implications of this kind of development for state wooing potential investors?

The 2016 anti-land grabbing has done justice to that. The issue is that people are unaware of the law and besides, the Nigerian police need to be educated about implementing the law. The law travels far and wide.

This law is not just about land snatching, it further stated that if you claim to have acquired documents for your land, you must go through the legal process, and get the legal backing from the court to enforce the judgment.

However, before the court makes their judgment, they would have specified the exact location of the land (where it begins and ends). This is what we refer to as the dispute survey plan.
What is your take on the issue of local government autonomy in Nigeria? There is an amendment process recently assented to by the National Assembly and forwarded to states’ assemblies to be rectified… only 10 states have reportedly passed the law. How do you view this?
It is desirable to have that constitutional amendment but it should be known, that it is not the only proposed amendment before the States’ Houses of Assembly- there are about 23 or more amendments that will follow the same process. If some states are having issues with few of the proposed amendments of the constitution but they have no problem with supporting local government autonomy, automatically local government autonomy law will suffer for it.

It is just that some States’ Houses of Assembly are not focusing on doing the needful, which they are aware that it is right. Some laws included in the constitutional amendment do not sit well with some states that are in support of local government autonomy and this is the reason they are against pushing the bill. This means that our local governments may not become independent soon.

Is the present constitution a major problem for the country?
Undoubtedly, the constitution is a problem but the people are the bigger problem. Even if the law is weak and faulty, what we need are elected representatives with good intentions to change such obnoxious laws; however, failure to do it will make the constitution look incapable.

If we can find lasting solutions to the present challenges facing the constitution, it will settle many issues affecting the progress of the country.
In addition, if our people do not desist from doing evil, changing the constitution will be fruitless. Many of our elected representatives need to be humane and committed to governance. Usually, the process of constitutional amendment will come with constitutional amendment acts. That act will contain all the clauses to be amended concerning different material issues.
Furthermore, the local government amendment autonomy is one of the issues pushed forward among others while the case of the Value Added Tax (VAT) did not sail through although the Supreme Court is yet to give its judgment.
Others include the issue of redefining indigene-ship to allow residents who have lived in a place for a period to become an automatic indigene of that place. However, in the context of Nigeria’s cultural situation, it is almost impracticable because it might not be fully implemented.
There should be a reworking of the structures on ground before such a proposal is made to reduce the problem of preferential treatment some regions of the country are enjoying. Some States’ Assembly will not pass the bill of local government autonomy until many issues are addressed.
Is restructuring part of the constitutional amendment?
The proposed amendment is not part of the restructuring. These are some of the reasons why some states have developed cold feet on the issue of local government autonomy when the most pressing issues affecting the country are not addressed.
What admonition do you have for President Buhari and our politicians?
I feel the most critical thing affecting the unity of the country is that everyone is suspicious of the other. In every region, groups are suspicious of one another. The head unites the body; I feel no region should be given preferential treatment because trust is earned and not conferred.
The president needs to unite the county irrespective of the sacrifices and be ready to move away from entitlement to equity.
This same principle applies to the president and also goes to every political office holder. It is a demonstrable action and it must be seen as such. The law says justice must not only be done but must also prevail.
How did Nigerians find themselves in this mess they are today?
It was a gradual slide into decay starting from the corruption that has grown over time. People have substituted values for benefit and merit for preference. Amnesty today is also a problem since everyone claims it as a political tool, militants, Boko haram elements got amnesty and some are proposing that bandits should also get amnesty. I am a die-hard believer in Nigeria and I know those who have left Nigeria will eventually return.

You Are A Woman Of Substance Who Have Impacted Humanity Gracefully; Ilaka Celebrates Mutiat Ladoja On Her 67th Birthday.