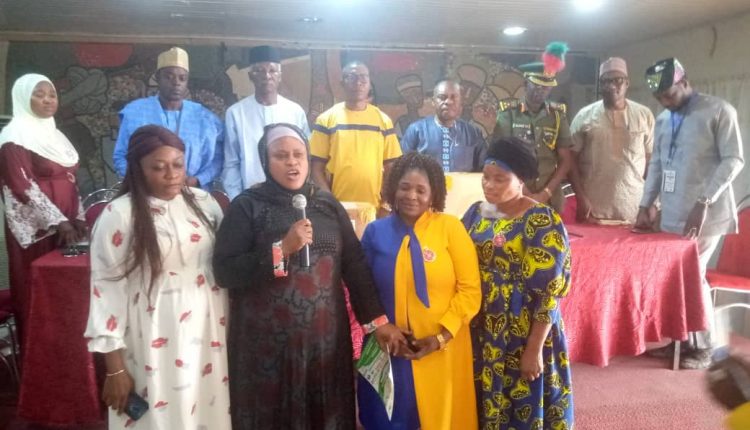 The Military Widows Association of Nigeria (MIWA) has declared that widows of slain military men who paid the ultimate price with their lives for the protection of Nigeria’s unity and territorial integrity are very proud of themselves as widows of brave men rather than being wives of living cowards.

This disclosure was made by the National President of MIWA, Mrs Veronica Gift ALOKO, on behalf of the military wives association in Ibadan on Friday December 17 at the official flag off of Nigerian Legion 2022 Stickers.

The Military Widows Association of Nigeria (MIWA) is a registered association regulated under the Nigerian Legion Act to cater for the wellbeing of wives and families of slain Nigerian military men. 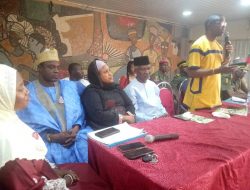 Mrs Aloko, who struggled to hold back her tears while addressing participants at the one day event appealed for more support from state and federal governments for wives and families of slain military men describing the situation many military widows and their families face after death of their husbands as unspeakable.

Emotional Aloko expressed her deep appreciation to Nigerians who have taken up the burden to stand by MIWA noting that it takes a brave person to take up the challenge of care and support for others. She prayed for participants, the capacity to make meaningful impacts.

“I am proud to be the widow of a brave man than to be the wife of a living coward. We are all standing here today in embrace of what they fought and paid for, and I say today that you’re all brave because it takes a brave man to take up this challenge.

“You’re going to face people in the world that will look down on you for doing this but from my heart I thank you all, and for my sisters I say thank you, especially Mrs Lemu, because for you to stand for this for us I say thank you very much, we can not pay you back but it is only God that will reward you greatly.” Mrs Aloko said emotionally.

The Oyo State Commandant of the Nigerian Legion, Akinwumi Alonge, who recanted how he lost his Military father at a very tender age while according to him his mother was merely 25 years old as a wife said his childhood experiences while growing up informed his passion for the love and passion towards his job.

Alonge who berated vehicles patronizing fake stickers of the Legion described such act as uncharitable and illegal saying that the 2022 stickers was specially printed by Mint, printer of Nigeria’s currency and other state and federal governments official documents, for the purpose of security.

“So when anybody tries to threaten me because you’re selling fake documents you must know that I can not be afraid after all the trainings I have been exposed to so, let us discourage the patronage of ex men, ex service men, ex men haulage or whatever, they are all illegal.

“I’ve mandated my men nationwide, if they catch them (users of illegal stickers), they will deal with them. Any vehicle that we see the fake stickers, we will tear it because this is the only approved. This is an established Order CAP L119 Law of the federal republic of Nigeria Volume 12.

“It is the law of Nigeria that established the promotion of Legion Mass Transport Scheme, so any other thing apart from is illegal. Alonge said.

He added that payments for the authentic Legion stickers are made to various states Internal Revenue Agencies stressing that such legal patronage does not encourage multiple taxation stressing that a situation where a vehicle owner has duly paid his or her dues to a state internal revenue agencies, such person is not obligated to make any other payment even when driving across borders to another state.

“There is a prescribed levy for you when you own a vehicle, approved by different state internal revenue agencies. The joint service board does not encourage multiple taxation. So, it is multiple taxation if you have paid your revenue to Oyo State internal revenue and you now enter Ogun State, and they now impound your vehicle that you must buy their own document, then that is not allowed.

“So, you buy the document from the state where you’re resident. When you buy from there and you enter any other state, you are already covered and duly recognized. Alonge added.

Other speakers who spoke appealed to the people to shun all forms of cutting corners which encourage sharp practices and illegality to patronize the Nigerian Legion’s government approved stickers in order not to shortchange due source of revenue for the Military Widows.