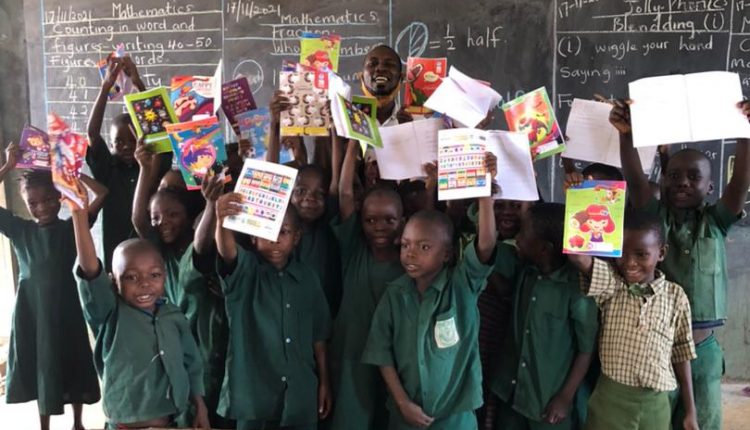 The Foundation said the gesture was part of it’s drive towards creating access to quality educational materials especially for the less privileged who are hungry to acquire formal education.

According to the Chief Executive Officer of the NGO, Comrade Moyosoreoluwa Olamilekan Eldreez, while speaking with Sunrisebulletin.com, noted that the items were to compliment efforts of the Seyi Makinde led government towards improving access to quality education in public schools in the state.

Speaking on how the NGO source for its resources, Moyosore explained that most resources are from personal income stressing that his passion to see an egalitarian society where everyone will have equal access to quality of life has been the driving motivation behind the NGO.

“Then we also went to primary 6 class to donate 9 copies of textbooks which we believe will help them prepare well ahead of their common entrance examination into secondary schools.

“This is just a bit we could do out of our widows might as an NGO and we believe that if we have the capacity to do more, we will surely be able to reach out for more and touch more schools.

“At MOE Foundation, we do not believe development of the society is solely government responsibility because government is continuum and no single government will ever be able to accomplish everything.

“That is why we must as individuals, associations, body of NGOs play our part within the limits of our resources to ensure we make positive impacts on the society because Governments will keep coming and going but the society remains our own and whatever we make of it is what we get.

“I’m a disciple of Governor Seyi Makinde because I personally believe and trust in his leadership, his political philosophy, his disposition to governance and administration of public resources therefore, it is my strong conviction that our little social support at the grassroots level will have greater impact on the larger society which the Seyi Makinde led government is building for us and generations to come.” Moyosore said.

While appreciating Governor Seyi Makinde for his development of education sector and his giant strides towards ensuring that teachers and education administrators live a quality life during and after active service, the school Headmistress, Mrs. Akintayo alongside other teachers who expressed their joy commended efforts of the NGO for extending such gesture to the school and prayed for more strength to be able to do more.