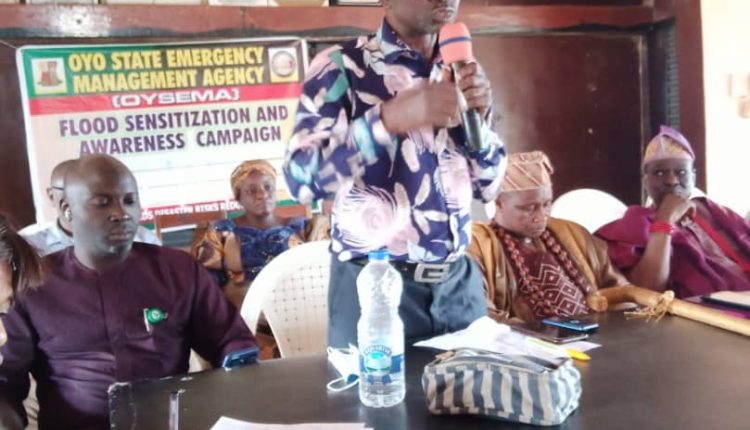 As part of efforts by the Oyo State Government to step up it’s sensitization campaign aimed at enlightening residents in the state about the hazards of environmental degradation and unlawful erection of structures along waterways and other flood prone areas, the Okere of Saki, Oba Khalid Oyeniyi Olabisi in company of OYSEMA team has allayed fears of Saki residents about the occurrence of earth tremor in the area which some have attributed to signs of end time describing it as natural phenomena.

The State Emergency Management Agency (SEMA) embarked on a two days intensive awareness campaign between Wednesday and Thursday to selected local government areas in Oka-ogun zone in order to prepare residents ahead of the forecasted heavy rainfall.

Nigeria Meteorological Agency (NIMET) had earlier cautioned some flood prone states in the country ahead of heavy downpour in the later part of the season urging concerned state governments to commence strategic moves to prepare residents ahead of the forecasted period.

The Executive Secretary, Oyo State Emergency Management Agency (OYSEMA) Alhaji Luqman Aransi in his remark while addressing residents of Saki on Thursday, 23rd of September 2021 during a sensitization tour of the area urged the people to avoid whatever puts them or any structure along waterways and other flood prone areas.

Alhaji Aransi stressed that disaster management was everybody’s business and could therefore not be left in the hands of government adding that any act of nonchalance or ineptitude on the part of the people towards the warnings could be gravious and may be too late to prevent onçe allowed to occur.

Speaking to traditional rulers, community leaders, top local government officials and disaster management personnel from six local government areas of Oke-ogun zone Saki West, Saki East, Atisbo, Irepo, Oorelope and Olorunsogo local government areas, Alhaji Aransi recalled that the Nigeria Meteorological Agency (NIMET) had predicted that there will be heavy rainfall in October and would likely be accompanied by flood, rainstorms and other negative phenomena in twenty seven out of the thirty six states of the federation.

While pointing out that Oyo State, particularly Oke Ogun area of the state is among the risk zones, the OYSEMA Secretary enjoined inhabitants of the area to abstain from actions that could cause flood and rainstorms that may lead to avoidable damages.

“Meteorologists have informed us that Oke Ogun is one of the flood prone areas in Nigeria. Therefore, we are appealing to our people to desist from practices that bring about flood, such as blocking of waterways through indiscriminate dumping of refuse in streams and rivers. We also enjoin people to stop cutting trees without replacing them as this could aid rainstorms”, Alhaji Aransi said.

In their separate remarks at the sensitisation parley held at the Saki Town Hall, the Alepata of Igboho land and the Alamodu of Ago Amodu Oba Johnson Olaoye charged the people to ensure that their communities are clean always.

The Royal Fathers further admonished their subjects to heed the warnings of disaster management experts and ensure full compliance with all precautionary measures.

The traditional rulers thanked the OYSEMA Sensitization Team for touring the area to enlighten residents and sought government assistance in controlling erosions impeding free movement of people and vehicles in some parts of the town.

The Okere of Saki also used the occasion to allay the fears of his people on the earth tremor recently experienced in the town, stressing that the incident is a natural phenomenon, not an end time sign as being speculated.

The OYSEMA Sensitization Team had earlier on Wednesday 22nd of September 2021 held similar exercise in Okeho, with a clarion call on residents of the area to desist from actions which are inimical to healthy habitation.

Other members of the OYSEMA team on the sensitization tour included the Agency’s Deputy Director of Research and Resources Barrister Tayo Ayoade, the Deputy Director (Administration) Mrs Motunrayo Adeniji, the Social Welfare Officer Mrs Agboola and others.